Chepstow Choral Society was formed in 1979, and has been performing live music in the town regularly ever since. Currently directed by Graham Bull, Head of Performing Arts at a leading Gloucestershire school, it has about 65 members in total, of all ages & abilities.

Over the years, the choir has performed a varied repertoire, ranging from traditional favourites such as Handel's Messiah, Vivaldi’s “Gloria” and Faure’s “Requiem”, to the lesser known pieces such as Andrew Carter’s “Benedicite” and Vaughan Williams “An Oxford Elegy”.

The choir performs at least once a year with a talented group of young instrumentalists and soloists, and has also joined with both Chepstow schools & the recently formed Beachley Millitary Wives for their traditional Christmas concert.

With continued local support, Chepstow Choral Society has a bright future, and will continue to offer a mixture of challenge, enjoyment and steady advance as the major representative of mixed larger- scale choral singing in the Chepstow area.

Graham Bull started his musical career as a chorister at Christ Church Cathedral School, Oxford. He gained his Music degree from Exeter University in 1981, specialising in conducting and composition. As a member of the BBC National Chorus of Wales for many years, he enjoyed singing under a host of conductors including Simon Rattle, Neville Marriner and John Elliott Gardiner, and being involved in countless broadcasts and recordings for BBC Radio 3 and TV, including several BBC Proms concerts. During the 1980s and 90s he also sung for and conducted the Exeter Cathedral Chamber Choir – directing services in St Paul’s Cathedral and Westminster Abbey in London, as well as in provincial city cathedrals.
Graham took up the role of Musical Director of Chepstow Choral Society in 1998 and has helped the choir to build an enviable repertoire of classics and less frequently performed works. He is also Principal Conductor of Bristol Millennium Orchestra.

Marjorie commenced piano lessons on her eighth birthday and it was her principal instrumental study (with Doreen Stanfield) during her graduate course at the London College of Music (1967-1970). After teaching posts in Lancashire and Midlothian, she moved to Sheffield in 1977 where she established a successful and thriving piano teaching practice. After coming to Chepstow in 1991, she joined Chepstow Choral Society as a singing member, becoming its accompanist and assistant musical director in 2001. She has performed in several of the Society’s concerts in both an accompanying and solo capacity, including playing continuo with the orchestra when required. Marjorie has a wide experience of choral singing, developing a love for it initially at school. She was a member of all the choral and vocal groups at the LCM, as well as singing with the London Student Chorale, and spent more than a decade with Sheffield Philharmonic Chorus. In recent years she has also had the privilege of accompanying soloists for a variety of recitals and concerts, as well as enjoying playing with various ensembles.

June 2016 saw Marjorie officially accompany the choir for the final time, and after a wonderful concert where she played with great passion and committment, the choir recognised her contribution with some lovely gifts and all their best wishes. But Marjorie hasn't gone far, and is very much enjoying singing in the Soprano ranks !

Having shown interest in making ‘musical noises’ from an early age, Richard started his musical education at age 6, with piano lessons. His musical interests were further stimulated when he was fortunate enough to attend Bolton’s Thornleigh College, renowned locally for its excellent musical education and productions, thanks to its music teacher, Fr. Michael MacGovern. In the course of his secondary education at Thornleigh, Richard had the opportunity to experiment with other instruments (violin, cello, euphonium, organ...), and to join in with a variety of music-making activities, including SATB choir, brass band, orchestra and jazz (Glenn Miller) band. By the time he left, he had become main accompanist for the school choir, and played keyboards in the jazz band, as well as taking part in other "impromptu" musical ensembles (such as playing piano accordion in an "ethnic" Polish band!). Having achieved Grade 8 in Associated Board piano exams, he was encouraged to work towards a diploma, but never completed it, due to conflict with "A" levels.
As well as providing a wonderful musical education, the school also inspired a life-long interest in electronics/physics, and Richard went on to a Bachelor’s degree in Electronic Engineering at Bradford University. This provided the stimulus to become involved in electronic music, including construction of what, for that time, was an advanced digital synthesizer. When time permitted, Richard continued his piano playing, and won awards at a local festival.
In 1978, whilst studying for a PhD in Physics in London, he met Elizabeth, his wife-to-be (at the University of London choir!), and having married and completed their studies, they moved to the Midlands. Though the next few years were relatively lean, musically speaking, (being occupied with building his research reputation, and starting a family and a business) Richard did build a spinet, and was temporary conductor for the Alcester Singers, conducting Rossini's "Petite Messe Solennelle", and playing piano for their production of Orff's "Carmina Burana".
Richard moved to Wentwood (near Usk) in 1995, running his own electronics/software business. He joined various "drama" related ventures as accompanist/musical director. Amongst other shows, he wrote the music for musical theatre productions by Diabolical Drama, and was musical director for the Savoy Youth Theatre production of "Little Shop of Horrors" in Monmouth. He also played keyboards in a couple of local rock bands for 8 years. These activities provided opportunities to associate with and learn from a number of highly experienced "mature" musicians, as well as encountering some amazing young talent.
Having explored all this diverse musical experience, Richard decided, in 2015, to come back to his roots, and restarted piano lessons. He readily admits that he has always preferred accompanying to playing solo, and he is thoroughly looking forward to working with CCS. 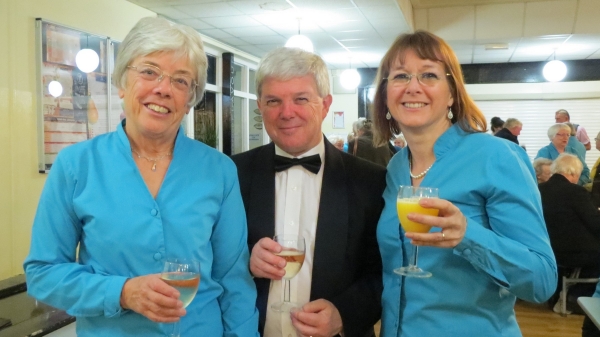 Chepstow Choral Society strives to promote and encourage the art of music within the community by giving three or more public concert performances of choral music per year, often with orchestral accompaniment. While presenting these programmes, we foster and support young and aspiring musicians. This can only be done with financial support from the community as our ticket sales rarely cover the costs of our concerts.

In return for your annual subscription (minimum £30.00) you will receive: a discounted ticket for each concert; an invitation to our Patrons’ Supporters’ and Friends’ evening and your name will be printed in each concert programme. You will also have the satisfaction of knowing that your patronage will help us to arrange concerts confident in the knowledge that we have a secure income to cover at least some of our costs.

If you would like to join us please contact Kathryn Hughes, Patrons and Membership Secretary      kathryn.m.hughes@gmail.com or call 07872 528152